HomeConnect With UsYear-End Campaign
A- A A+

Imagine being a new parent, recently in recovery and in need of a roof over your and your child’s head. Courtney, a young woman facing such adversity, found hope at the doors of the YWCA. 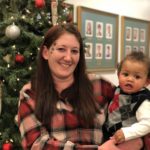 Courtney spent almost 90 days at a substance treatment facility last winter before coming to the YWCA Emergency Homeless Shelter. During her stay at our shelter, Courtney enrolled her infant son into the YWCA Canton’s Early Childhood Learning Center, through our Early Head Start, which granted her the time necessary to focus on securing housing and employment. Courtney worked with her case worker through our Rapid Re-housing program, where she was able to find and secure permanent housing that was within 30% of her income. She found and secured housing in less than 60 days in our shelter!

Since leaving the shelter, Courtney remains steadily employed. Courtney took part in the Reinstatement Fee Amnesty Initiative program which canceled almost all the reinstatement fees and allowed her to obtain her driver’s license. She has since purchased a reliable vehicle to get her and her son safely to our facility, work and school. Courtney graduated earlier this month from the CHANCE Program which dismissed her felony drug charges. Courtney is graduating this month with her high school diploma and plans to pursue her associate degree at Stark State College. Courtney also celebrated a year of sobriety.

The YWCA’s housing and early childhood education programs provided the foundation Courtney’s family needed. Courtney and her son were gifted such an opportunity to grow beyond their circumstances because of your generosity.

Our community’s poverty rate stands at 14%* with 1 in 4* young children living in poverty. An additional 24%* of families struggle to make ends meet.  While we are actively providing housing services and early childhood education services for the underserved, we need your help in stimulating hope for even greater change in our community.

Thank you for donating to the YWCA Canton’s year-end campaign. The YWCA Canton will put your monetary donation to work right away on behalf of the women and children in our community. We can’t do this without you, and with you we make a difference. You can trust that your gift will have a direct and immediate impact on the lives of those we serve. Ninety-two cents of every dollar donated goes directly to funding our critical programs and services.

Are you experiencing homelessness?